Verification Studies on the Geo-Design of Bright Hill Monastry

The flourishing place with Wu-Chang Faction of geomancy

‍Bright Hill, so named, is not exactly a grand hill but an undulating mount. Whereupon this mount is the Phor Kark See temple, whose geomancy layout designer is none other than the Venerable Sek Hong Choon being a well -known monk in the Malay Archipelago.

‍Venerable Sek was born in 1907 (2nd Age), came to Singapore in 1938, thereafter went to Penang in 1943 to be the abbot of Mio Hiong Lim Temple where he met Wu-Chang Sect Geomancy Grand Master Yu Xi-yin. This chance encounter made the Grand Master accept the Venerable as his selected disciple to impart the Xuan Kong geomancy theories

‍Therefore in 1965, Venerable Sek officially returned to Singapore to take charge of the building of Phor Kark See Temple. Venerable Sek Hong Choon devoted his time to the Buddhist faith. It is a great loss for not imparting his geomancy skills to any of his close disciples. We could only induce from the geo-design of Bright Hill Monastry, the theory of his geomancy methods.

An outline sketch of Wu-Chang Sect of geomancy

Facing stars are '14', indicating education and fame. The temple having educational and reputed status will be of much hope to the faith learners aspiring early to supramudane realization and fame will lead to effective propagation of Buddhism (most South East Asian temples are facing west, but this temple otherwise faces the North-East). 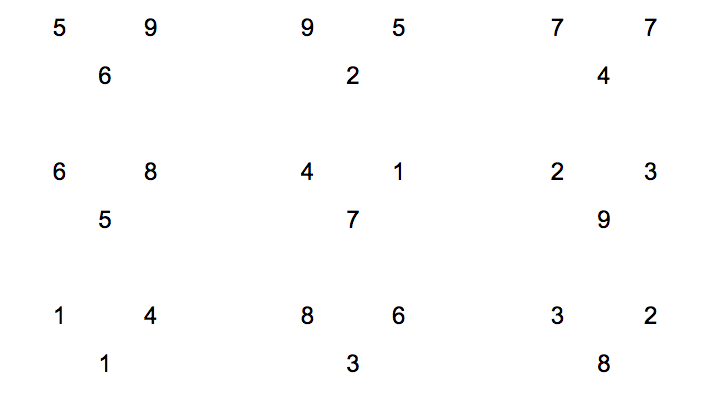 Unique features of the geomancy at Phor Kark See Temple

Both Star Age being 6, the favorable star of the Lower Cycle, though not quite enhancing. Moreover, facing Gua Age being 3 indicates dissolution energy of the Upper Cycles.

To bring about the continuous enhancement of its position till the 9th Age of the Lower Cycles, the Main Hall of the Temple has its doors slightly tilted in their facings, the following being their conformities:-

This method can fill the gap of tensile ripe by the twin-star formation, and correct the defect of prosperous star fall in the wrong position.

After fine-tuning the facing, the temple could be in good stead until the 9th Age (note: presently, the innate Gua Age is the 8th Age of the Lower Cycles from 1996 to 2016, the 9th Age starts from 2017 till 2043); therefore there will be 48 years of favorable period, showing the intricacies of its design wonder.

The doors after correction of facing are as follows :-

In the study of Great Attributes of Mystic Cosmic- the Xuan Kong Da Gua theory, this strategy called 'Coherence of energies of the You Bi star.'

A major unique feature of the Wu-Chang Sect of geomancy is the special focus on the siting of water sources and their corresponding courses into the various sectors of subsidence and enhancement (note: Xuan Kong Oral Rendition on theory states that Mountains govern the solid strength and Waters govern the flowing gentleness"). Phor Kark See Temple is situated upon a mount on Bright Hill Monastry, being built along the hill with waterways running by the hill contours from the highlands to low lying areas, with the main water pool wrapping in the formation of 'Golden Belt around the Waist'.

As such, Phor Kark See Temple does not see an end in visiting followers, and all donations given willingly. Herein is the geographical picture of Bright Hill Monastry reproduced for readers to carefully study its intricate geo-design and to realize the Sages' words: Heavenly secrets are within the Xuan Kong, Pure Energy flow differs constantly; the Fateful Ones to know will see Its Wonder, the Three Era is thus within a palm's grasp". 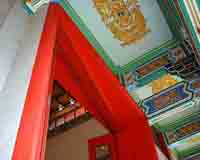 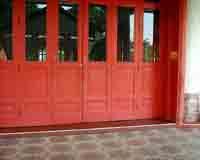 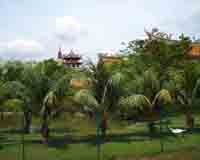 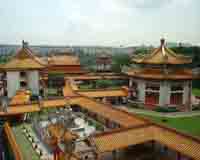